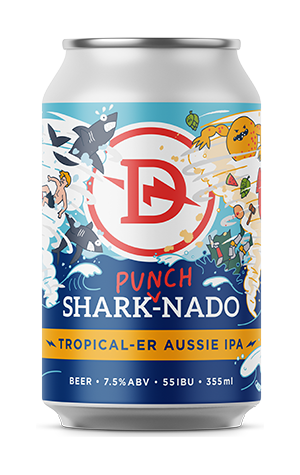 In 2019, Dainton released Shark Punch; an Australian-hopped tropical IPA that asked whether or not sharks and people could get along. As the far wilder 2020 entered its final month, the brewery gave the beer an update to reflect the year we've had and created the “tropical-er” Shark-Punch-Nado.

Given the regularity with which they appear, and the success of Dainton’s hazy IPAs, our first assumption was that “tropical-er” might feature a similar approach, but instead it’s a perfectly clear, orange-hued and bitter West Coaster. The tornado on the can hints towards what the hops have in store for you too, with a mix of candied orange, grapefruit, passionfruit, melon and pine all ripping through the unassuming coastal town (or your palate) before pulling off a slightly sweet landing.