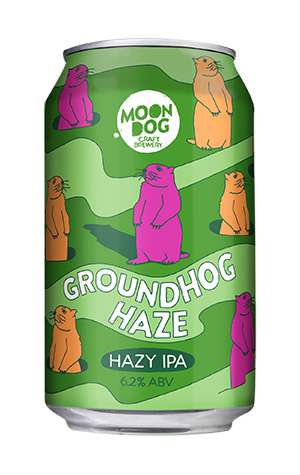 Back in the sad days of VHS there were probably four films – all taped from the TV – that I regularly returned to. The first three were the Back To The Future trilogy I watched so often I can still remember what was happening on Ramsay Street circa 1994, and the fourth was Groundhog Day. It’s a film I enjoyed so often that, looking back, maybe living inside the Punxsutawney purgatory that befouls Bill Murray wouldn’t have bothered me all that much.

Just as returning to an old tape over and over seems like a quaint idea in the world of streaming, revisiting a hazy IPA when there are so many – and so many more on the way – almost feels a little old-fashioned at times. But going back to a beer you like is what Moon Dog are hoping drinkers will do with Groundhog Haze, a deep golden IPA featuring the hop combination of Idaho 7, Citra and Strata.

Along with an incredibly soft mouthfeel akin to the dulcet sounds of Sonny & Cher, Groundhog also provides big, juicy notes of grapefruit, stone fruit and mango, which are joined by a piney element too. Rise and shine campers, and don't forget to drink the same beer twice if you want. Feel free to watch the same movie every day of the school holidays too.