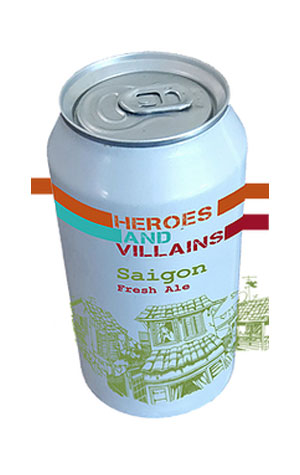 Inspiration struck Heroes and Villians founder Shannon Mizen while sitting – sitting on the top floor of a Saigon hotel, inhaling food aromas rising from the street below while drinking clean, crisp Vietnamese beers.

Encouraged by wife Sally, Shannon scuttled plans for that year’s annual Christmas beer – a gingerbread affair – in favour of celebrating the family holiday and the heady street food scents.

Here, lemongrass and ginger are added to a clean ale base, with honey providing balance and more fermentable sugars, which help dry the finish, although the honey becomes noticeable at the beer warms.

Saigon is Shannon’s favourite summer beer and, despite the exotic nuance within, he recommends drinking it straight from the can, preferably while cooking a BBQ.