These days, you’ll find Heroes & Villains growing into their Osborne Park brewery, yet the story stretches back more twenty years, of which the past few have seen head brewer Shannon Mizen’s dream realised in liquid beer gold.

Like many, Shannon began homebrewing as a means to save money, and over the following two decades accolades and awards accumulated, thanks in part to a thoughtful Christmas present.

Armed with the gift, a new world of possibilities opened up; later, for the Mizen’s tenth wedding anniversary, Shannon received a Grainfather brew kit – possibly another gift wife Sally might have had second thoughts about. One of the first brews, a Belgian pale, collected a gold medal at the 2014 WA Amateur Brewing Awards, part of Perth Royal Beer Awards, and provided a tipping point towards thoughts along the lines of: “What if this became more serious?”

After an extensive career in sales and marketing for utilities companies, the desire to craft something for himself took over, beginning with a business plan in 2016, then Ritual Brewing in 2017. All being well, Ritual would have debuted that year, but trademark issues with a winery scuttled the name.

As such, it was the release of the Villains album by Shannon’s favourite band, Queens of the Stone Age, that bestowed the then stateless brewery with its new nom de plume, Heroes and Villains. The Californian rockers also inspired the new brewery’s commercial debut, Beer of the New Age pale ale, for which Shannon is enthusiastically unapologetic: “I love beer and rock ‘n roll!”

Brewing originally took place at Oakover Winery thanks to, oddly enough, a coffee connection. There, he secured the lease on a small, 100 square metre site, and installed equipment in April 2018 ahead of that first release in September 2018.

However, it wasn’t long before the developing scale of the brewery called for a new location, and thus a move from the Swan Valley to “hipster tradie” Osborne Park – an evolving industrial hub 15 minutes north of Perth’s CBD – in February 2020.

Once established inside the former furniture restoration business, Shannon committed to Heroes and Villains full time, scaling to a potential 80,000 litres per year, and resigning from his job in March 2020 – just as the COVID-19 pandemic hit hard. The months that followed featured a mix of consulting work for his former employer, mountainous legislative paperwork, and a wait for restrictions to ease.

However, the time also allowed Shannon to refine the Heroes and Villains offering, which now consists of four core range beers – the Heroes – plus a growing range of one-off, limited releases – the Villains.

The Heroes include Beer of the New Age (BOTNA) American Pale, and evolving IPA Renegade, which are supported by the Saigon Fresh Ale featuring lemongrass, ginger and honey through the warmer months, and Dark Hearts, a brown ale brewed with honey as the weather cools. That said, there is crossover in the availability of these two. They’re all clad in Sally Mizen’s hand-drawn artwork, each featuring details of the beer’s backstory.

Then there’s the Villains: a collection of experimental one-offs, released once a month in both cans and kegs. To date, these have included Lockdown West Coast IPA, a homebrew competition-winning IPA using English hops, Van Damme Belgian ale brewed with Saaz, The Swamp NEIPA featuring Strata hops, and Downstairs, To The Right, a Belgian Hazy IPA celebrating Perth venue The Rechabite’s first birthday.

As for their titles, Shannon notes: “All the Villains’ names take the piss out of something.”

At time of writing, you can visit the brewery to enjoy them via tasting paddles, and pick up cans and growlers for takeaway, with Shannon working towards having a taproom open in early 2021.

Yes, it's that time for The Crafty Pint team and friends to attempt the ever trickier task of encapsulating the best of Aussie craft beer for another year. And once again we kick off our annual Best Of series in Western Australia. Heroes and Villains' surrounding Osborne Park neighbourhood inspired Gordon Road Draught. Located on the side of the Northern Freeway, the industrial area is home to bespoke food production, furniture retailers, luxury car yards, and the biggest cheese room in the Southern Hemisphere. And, while all of this is entertaining, sometimes all you want after a long day's toil is something simple, clean and refreshing. Shannon says it was partially driven by the desires of the tradies dropping in on Friday… Read more
Golden Yellow 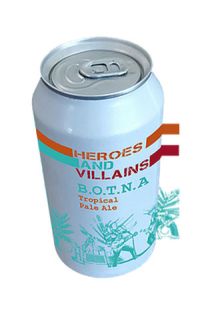 Heroes and Villains Beer Of The New Age (BOTNA)

The beer that started it all. Well, commercially at least. Beer Of The New Age not only nods at a certain rock band, but is also a reflection of changing tastes. The modern pale ale malt base includes golden naked oats, Maris Otter, pilsner and a touch of CaraMunich for good measure, keeping the malt rhythm light and tight. And, at 32 IBUs, the leaner base makes the perceived hoppy bitterness feel firm, even if the reality is that it’s far more approachable than it may appear. Speaking of hops,… Read more
Golden Yellow 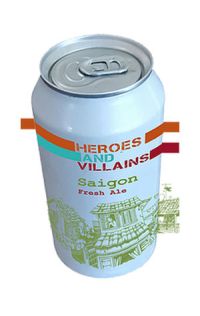 Inspiration struck Heroes and Villians founder Shannon Mizen while sitting – sitting on the top floor of a Saigon hotel, inhaling food aromas rising from the street below while drinking clean, crisp Vietnamese beers. Encouraged by wife Sally, Shannon scuttled plans for that year’s annual Christmas beer – a gingerbread affair – in favour of celebrating the family holiday and the heady street food scents. Here, lemongrass and ginger are added to a clean ale base, with honey providing balance… Read more
Golden Yellow 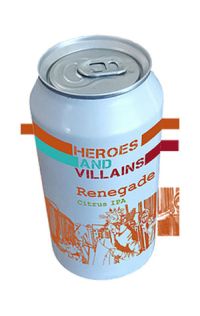 Renegade has become a tribute to once difficult beer within the Heroes and Villains lineup. “It’s called Renegade because, when we used to make the old IPA, it pushed the limits of the system so hard that it never quite worked out the way we wanted it to," head brewer Shannon Mizen says with a laugh. "Something went wrong with every brew. So, we named this one after that, rethought our processes and actually got it right.” This frustration plays out on the label, but in the can there’s… Read more
Golden 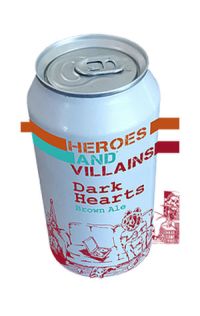 The second beer Shannon Mizen ever made in the brewery was also the first Villain – the name under which he puts out limited release of one-off beers. Or so he thought at the time. Instead, the warmth of customer feedback was so strong this dark hearted one-off transcended to the good side, becoming a cooler month’s hero. Chocolate malt leads on the tongue, with toasty characters and Simcoe’s fresh resin and pine lurking in the background. Taken together, despite the foreboding title, it makes… Read more
Dark Brown The year to date has brought challenges for many, but nothing compares to the level of suffering unleashed on those living in or forced to flee from Ukraine. As the Russian invasion continues, the Drinkers For Ukraine campaign has offered brewers around the world an open source beer recipe, designed by Ukrainian brewers, with which to show their support: brew and sell the beer, then donate all proceeds to the Red Cross humanitarian relief in the country. The borscht-inspired Anti-Imperial Stout pours… Read more
Dark Brown

And their WA stockists Malmö: Ikea serving device, or Scandi cocktail? If you answered the former... meatballs for you! But if you prefer the latter, you’re in luck, not only for a coupe glass of Scandi refreshment via Scarborough bar SKØL, but also a cocktail-inspired sour beer from nearby collaborators Heroes and Villains. Super fresh, clean, tart and with a herbal periphery, Malmö runs a smart balance with some curious ingredients. Welcome: lemon myrtle, lingonberry – think: a sweeter cranberry, cumquats and… Read more
Golden When embarking on a collaboration it’s often best to draw from each contributor's world when creating something new. Here, when comedian Rory Lowe was asked what his ideal beer style was, he cited those of the affable summer / Pacific ale variety. The stage suitably set, Heroes and Villains have delivered – with a mischievous wink – a 9 percent ABV version of such a beer in support of Rory's Perth Fringe Festival show, Certified Funny Boy. Pouring dense orange, attendees will be met by Moutere’s… Read more
Golden Yellow

And from Heroes and Villains stockists and direct. Having mates in symbiotic industries has not only helped Heroes and Villains' Shannon Mizen land upon an early brewery location, but now his caffeinated connection drips through this substantial West Coast IPA. “We had several conversations about the idea of a collaboration over the years, and this year we actually did it!” he says. Shannon and brewer Richard Bentley-Moyes joined Swan Valley bean purveyors Fiori for a roasting and cupping session – that’s coffee speak for sensory assessment… Read more
Golden Ten, free flowing minutes north of the Perth CBD, Heroes and Villains have released a pair in which one dons a hero's cape, while the other takes the form of a villain. Our attention-seeking hero, clad in white, pours appropriately with a fine, moussey head. Sabro and El Dorado join forces in a citrus, pineapple and coconut *Attention Seeker**, which features a pithy closing bitterness. The villainously noir-wrapped Sunset streams blood red, thanks to the use of beetroot and char siu Asian colouring… Read more
Red

And WA Heroes and Villains stockists Oat loaded IPA, you say? Well, that’s what Heroes and Villains’ main man Shannon Mizen has to say, although this latest entry in their limited release Villains series could just as well be considered in the oat cream IPA realm, and, despite the name, Attention Seeker does almost the opposite for the much-hyped style. Instead, there's a calmer approach here that focuses on balance and drinkability, as evidenced by the considerably restrained-for-style, six grams per litre dry-hopping – a 50/50… Read more
Golden Heroes and Villains Your Mum Called

Your Mum Called investigates the Cascade hop lineage without using the classic American variety itself. Instead, Heroes and Villains use Hallertau Melon, Cashmere and Mandarina Bavaria hops which, instead of delivering the familiar floral and citrus / grapefruit expression of the parent, exude honeydew melon, with a supporting citrusy profile. There’s also a grassiness at play, and a building backend bitterness, which lingers through the clean finish. As for the name of this rye-enhanced India… Read more
Golden