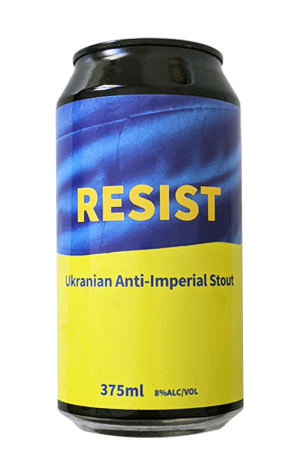 The year to date has brought challenges for many, but nothing compares to the level of suffering unleashed on those living in or forced to flee from Ukraine. As the Russian invasion continues, the Drinkers For Ukraine campaign has offered brewers around the world an open source beer recipe, designed by Ukrainian brewers, with which to show their support: brew and sell the beer, then donate all proceeds to the Red Cross humanitarian relief in the country.

The borscht-inspired Anti-Imperial Stout pours a deep ruddy brown and leads with an earthiness courtesy of the beetroot addition, with the character of the root vegetable appearing fleetingly as well. More typical imperial stout mocha tones soon shift to intense, lingering dark chocolate through the beer's lengthy close. And there’s plenty of bitterness to boot, perhaps a lasting liquid allegory for a zero-sum game, one instigated by ego, now haunted by grief and loss.

And their WA stockists