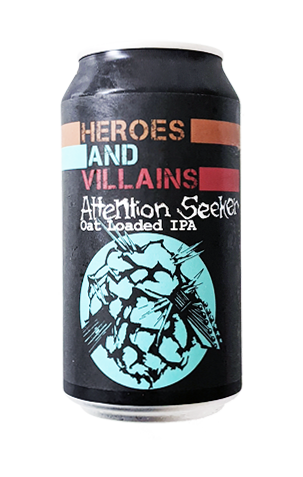 Oat loaded IPA, you say? Well, that’s what Heroes and Villains’ main man Shannon Mizen has to say, although this latest entry in their limited release Villains series could just as well be considered in the oat cream IPA realm, and, despite the name, Attention Seeker does almost the opposite for the much-hyped style. Instead, there's a calmer approach here that focuses on balance and drinkability, as evidenced by the considerably restrained-for-style, six grams per litre dry-hopping – a 50/50 split of Sabro and El Dorado.

In fact, most drinkers will be amazed just what a little lactose and a rather petite-by-contemporary-standards dry-hopping regime delivers, given the hefty double-digit amounts broadcast elsewhere. This less-is-more application creates a smooth, pineapple-inflected, tropical harmony, while keeping residual sweetness minimised.

As with all Heroes and Villains releases, there’s a story behind the label art, and here it’s linked to grindcore band Septic Death, something drinkers can be explore further via the QR code on the cans. Now, if only we knew how to use that little digital square.