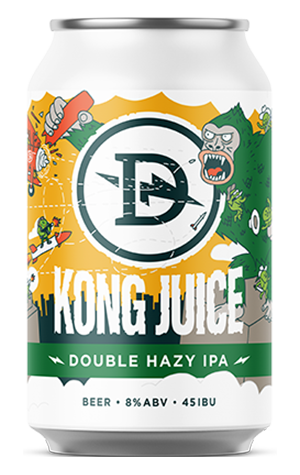 They love making big, hazy beers at Dainton, have won many a trophy for them, and their tropical-themed hazy IPA Jungle Juice is a deservedly popular core range release. So, much like the release of Godzilla vs Kong later this year, Kong Juice has been a long time coming – and there's an air of inevitability about its rise too.

Dainton have dubbed the double hazy IPA the "8% Wonder of the World" and it’s a beer that takes the spirit of Jungle Juice and loads it up not just with more alcohol, but more lupulin power too. It pours opaque and pale yellow with a slight tinge of orange and, while there’s a touch of pine on the nose, it’s tropical fruit flavours that fuel Kong. Those are led by mango, nectarine juice, freshly squeezed OJ and a touch of lime zest that adds to a slight prickle towards the beer's end.

Kong might be built big and be an easy sight to spot, but if it's bitterness you're looking for, you're on the wrong island.