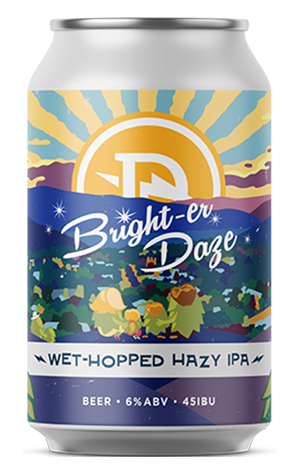 With the hop harvest only occurring once a year, it's a true time for celebration and for their wet-hopped hazy IPA, Dainton Beer are celebrating where they got their fresh hops from, Victoria’s High Country. Brighter-er Daze is a salute to the region’s resilience in the face of bushfires and no tourism for much of last year, with the can not only featuring hops enjoying the destination’s beauty but also featuring a QR code (side note: are they here to stay now?) to takes you to the High Country’s tourism website.

Being a hazy IPA, it’s the kind of beer that’s well-traversed ground for Dainton, though Bright-er Daze features not quite as thick an appearance as some of the brewery’s other hazy releases. The beer was dry-hopped with fresh Galaxy hop cones that made it in the fermenter less than 24 after being picked up from the farm, with the brewers also using Hallertau Blanc and Enigma in the kettle. Galaxy might be best known for its passionfruit qualities and while that note does make it into Bright-er Daze, there's a stronger mix of juicy mandarin, guava, peach and a slight grassy touch.