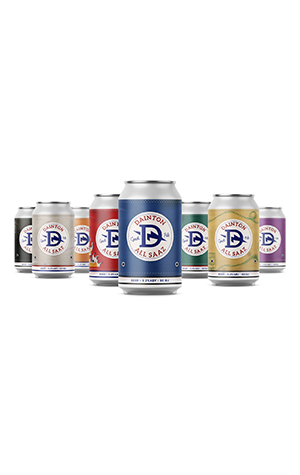 They often brew some pretty unusual beers at Dainton but their April 2021 limited release is a bonafide classic, in style, look fit, design and shape. If that sounds more like how you’d describe a pair of shoes over a beer, well, there’s a good reason for that when it comes to All Saaz. Dainton have put the same traditional Czech pilsner in eight separate tins all decked with different designs inspired by Chuck Taylors, complete with different notes scrawled on each. It means that like an indie kid’s teenage dream, you’ve got one for each day of the week plus a spare to save for a rainy, or rather, muddy day.

The fact All Stars shoes have remained largely unchanged since they were first released in the 1920s goes to show that sometimes it’s best not to mess with a classic. Pilsner might be a style of beer that's little older than the iconic shoes but following a mantra of “if it ain't broke, don’t fix it” is exactly what Dainton have done with All Saaz. It pours a clear and golden colour while the Saaz hops provide bright floral notes and a lighter touch of spice with some soft biscuit or bready flavours too and a bitterness that’s quite noticeable at first until - like a pair of fresh Chucks - it softly falls into a place of comfort.