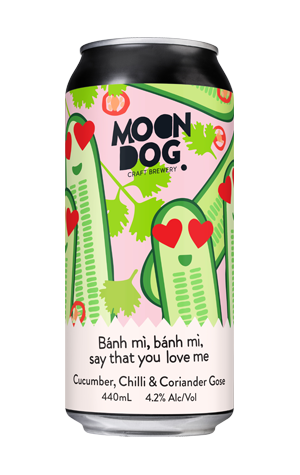 It's more than ten years since I had my first experience of cucumber in beer. It was in Mountain Goat's entry for the first ever GABS, back when it was held at The Local Taphouse in St Kilda and featured just 20 new beers from Aussie brewers. Designed by Jayne Lewis, who went on to found Two Birds Brewing, it was a golden ale brewed with cucumber and which, if memory serves correctly, was served with cucumber in it too. Roll forward a decade and what seemed subtly radical then would barely raise an eyebrow; add the remainder of the dressings from a classic bánh mì to a gose if you want to do so in 2021.

Moon Dog's Bánh Mì, Bánh Mì, Tell Me You Love Me goes heavy on the cucumber and adds a sprinkle of coriander and chilli to the saltiness of the pale base beer and, guess what, it makes for something very savoury and foodie. Floral, herbal spices and a fair bit of umami are set atop a very light, easy-going gose before the heat starts to creep up on you, making for an experience that's as much chilled, carbonated soup as it is overtly beer. Make of that what you will!