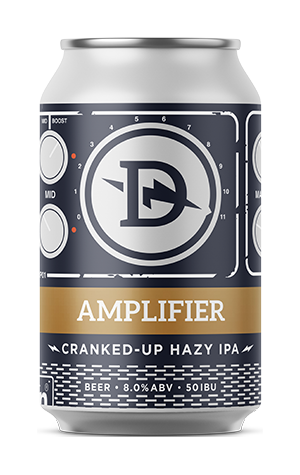 When you make a habit of brewing big IPAs and regularly raid the confectionary aisle and dessert fridges for beer inspiration, brewing a GABS beer presents a unique challenge. Do you make another chocolate bar beer? How big does your hazy need to be to stand out from the crowd?

Rather than brew their biggest hazy IPA ever, Dainton Beer have instead decided to go for their loudest, in the shape of a "Cranked-Up Hazy IPA." Although maybe it's not the loudest either because while at 8 percent ABV there is still plenty of booze in there, it's impressively well hidden. Largely that's thanks to how strong the aroma and taste of mango pineapple and nectarine flavours swirl through the glass and the beer's incredibly fluffy mouthfeel. While that might not sound very rock-n-roll, it is a beer that's very finely tuned and where the flavours are in harmony which arguably, makes it very rock-n-roll indeed.