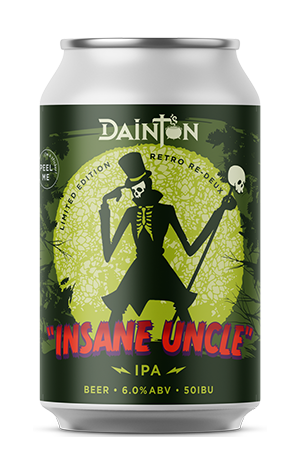 Four months on from (re)releasing their first ever beer, Red Eye Rye, Dainton are back exploring their own back catalogue with Insane Uncle IPA, released in July 2021. For those who haven't been following the Dainton story for its full history, Insane Uncle was the first IPA the - then nomadic - brewing company brewed, back when a family theme was running through their beers.

Insane Uncle later morphed into the brewery’s core range IPA and at the time, we’d found it had become a bit leaner and softer on the hops. Memories are never perfect and Dainton have brewed a lot of IPAs since then. so it's hard to say exactly how this re-brew compares to the very first Insane Uncle we tried. But what we can say is if you're looking for a pale, lean and boldly bitter beer then this family member likely has you covered. If you like your hop bouquet of the classic American variety, with a mix of pine, resin and a light touch of grapefruit, then once again, Dainton very likely have you covered.