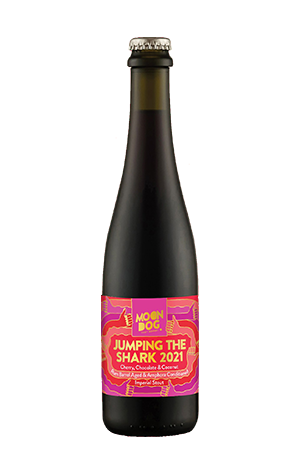 Moon Dog’s Jumping The Shark has taken us to many places over the years. For those unaware, the beer is the Melbourne brewery's exploration of beer at its most extreme edges and started out life in 2013 as an imperial stout with truffles, later included saffron, has been a concentrated IPA, and has spent time with many different spirit barrels too.

The 2021 iteration, however, takes a journey to fermentation’s earliest days due to a period spent in an amphora: ancient ceramic storage and fermentation vessels that wine was first – and at times is still – fermented in. The full title of this year's Jumping The Shark is Cherry, Chocolate & Coconut Rum Barrel-Aged & Amphora Conditioned Imperial Stout so, unsurprisingly, there’s a bit going on. Effectively, in October 2020 the Moon Dog brewers created an imperial stout and aged that in rum barrels while separately they put some cherry wine, cacao nibs and desiccated coconut into an amphora – a first for the brewery – and let that ferment.

Having only experienced a few drinks made in amphora, a key standout feature to me is often an associated minerality which, in the wrong hands, can make beer seem a little thin. It seems the Moon Dog paws are safe ones on that front, as JTS 2021 is as fulsome and lush as you should expect a 12.6 percent ABV, jet black beast to be. The cherry and coconut hit straight off the bat and their combination with chocolate make it taste similar to a very famous chocolate bar which also contains those ingredients, while there's a touch of stewed dates or raisins that swirls alongside rum-led notes of caramel.