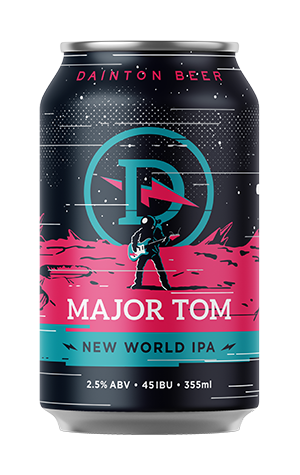 Given there are multiple hazy IPAs and a West Coast in the Dainton core range (plus a hazy pale), you might think the brewery has the hoppy side of beer pretty well covered. But, late in 2021, the Melbourne brewery have looked to fill a low-ABV gap in their core range by adding a riff-making and spacewalking “New World IPA” to their lineup. Major Tom is a 2.5 percent ABV that aims to champion exploration - although the kind of exploration championed is more about being able to have a few hoppy beers and still get a bit done, rather than necessarily being one that will transport you into an aeronautical engineer and take you into space.

This beer follows on from the brewery’s New Age IPA that was 0.9 percent beer and though Major Tom is a little bigger on the ABV, at 0.7 standard drinks per tin, it's a pretty light beer for a brewery with an "Imperial Range" within their core range. It's also a beer that stays true to the brewery's love of hops, with the flavours coming from those starting with citrus before moving to peach and swerving in a more piney and floral direction. Add in the beer’s orange and slightly hazy colour and limited bitterness and you have a modern IPA that might not lead you to play guitar on a space rock but will at least not hinder you practicing chord progression.