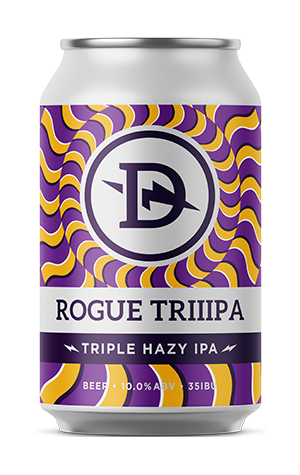 Dainton Beer’s limited releases for the last couple of years have been so constant and frequent that it’s occasionally felt like you could ditch your watch or calendar and just measure time by one of their new beers making it into the world. It means they've got a lot of favourites to choose from, so to mark the end of 2021, the brewers have returned to the hazy well and plucked out one of the biggest in Rogue Triiipa, a 10 percent ABV triple hazy IPA from about a year ago. The can comes complete with a classic Hunter S Thompson quote and a design that’s almost as mind-bending as (presumably) spending a few hours on the road with Hunter S would have been.

There’s nothing quite as madcap as Dainton’s beer, though, with Rogue Triipa instead displaying the brewing team’s knack for balancing booze, hops and flavour in a large package that doesn’t feel too heavy. Having said that, it is a particularly heavy-looking beer, pouring with a thick appearance and limited carbonation to effectively recreate juice in a glass.

In the glass, you’ll find further elements of juice courtesy of orange and pineapple, which then meets peach and the slightest whispers of pine. On top of that, there's a bitterness to balance out some of the sweetness stemming from the booze but, again, that bitterness is in balance to suggest that – hopefully, at least – nothing too foreboding is coming our way for the rest of 2021.