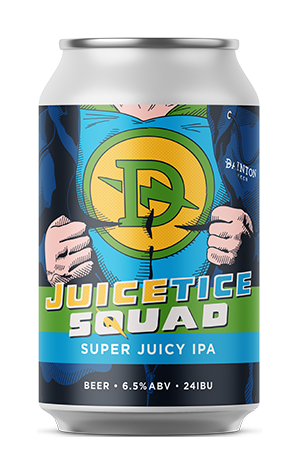 At times, it can feel like the only movies being made are those focused on superheroes. But, while such franchises might take up a lot of attention and cultural bandwidth, a case can be made that the mixture of movies being made today is broader than at any other point in history.

The same can be said for hazy IPAs – take a look at Instagram and it feels like there's a constant stream of them (and indeed there is), but plenty more styles await you if you glance at a bottleshop's fridges. Having said that, if you feel engulfed by both superhero blockbusters and juicy, hazy beers, maybe shield your eyes from Dainton's first limited release of 2022, Juicetice Squad. The "Super Juicy IPA" could even be a statement of intent of the brewery's plans for the year, as if to say: "If you want big and hazy beers, don't worry at all."

The 6.5 percent ABV doesn’t quite soar to the upper limits compared to some past releases from the Melbourne brewery, but it does triumphantly provide freshly-squeezed flavours thanks to Idaho 7, Hallertau Blanc, Calypso and Strata hops. You'll find kiwifruit, guava, passionfruit and lychee all leaping forward from the beer's smooth, soft base which also provides a lean finish to balance out those heavily-fruited features.