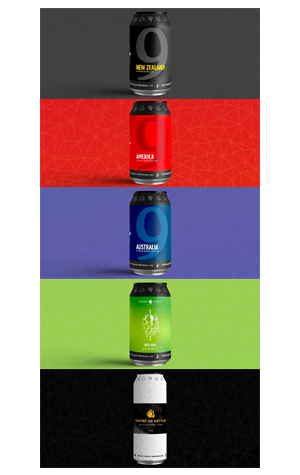 There’s been a hop-heavy slew of beer releases from Rocky Ridge since the start of 2022, and with the launch of their "9" series there doesn’t look to be much let up for hopheads anytime soon. That said, we’re sure there won’t be too many complaints about the use of too many hops...

The 9 Series is the latest in a long line of themed releases from Rocky Ridge, whereby all the hops that feature in the breweries famed Rock Juice are given their own IPA in which to showcase their contribution to "the Juice". First off the ranks here is an all-NZ-hopped hazy, featuring Motueka, Nelson Sauvin and Nectaron and exhibiting passionfruit, grape skin and a herbaceous, grassy character upon a modestly bitter base beer. The series also features an American-hopped hazy based around Strata, Citra and Mosaic Lupomax, as well as an Australian version displaying bold characteristics of soft herbs, fresh cut grass, citrus and mango courtesy of Galaxy, Ella and Vic Secret.

As for the one after 9, 9, 9†, Rocky Ridge have dropped an intriguing Wet Hop Best Bitter in collaboration with Karridale hop farm, blending new world hopping techniques with a style that sits firmly in the old world. EKG, Victoria, Columbus, Flinders, Centennial and Nugget hops all feature, and although hop-derived flavours feature heavily, it’s the beer's malt character that stands out, leaving you with sweet marmalade, bread crust and biscuity notes all paired with fresh hops.

Lastly, but absolutely not least, is the highly ambitious and experimental Master of Kettles, a ridiculous 24-hour boil barleywine that uses 100 percent Western Australian base malt. No, that’s not a typo, the Rocky Ridge brewers had a little brewhouse sleepover to producer this incredibly rich and decadent beer abundant in sweet toffee, stewed fruit and warming alcohol – as you can read here. A lot can happen in 24 hours, and in the case of Master of Kettles, it's an overload of malt-derived, sticky sweet flavour that lingers on and on.

† Apologies to Jono for slipping in a very tenuous reference to The Beatles here, but after spending more than a week in iso (well, pretty much a week in bed) with COVID, I've not had a chance to talk to anyone about Get Back so I couldn't help myself – Editor.