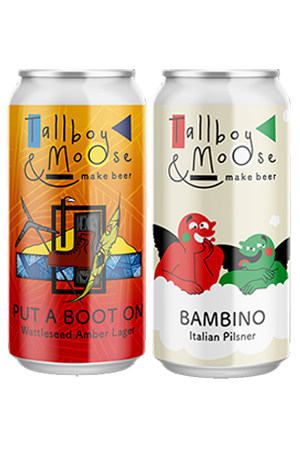 Pastry stouts and heavily-fruited sours might often rule GABS but Melbourne's Tallboy & Moose approached their festival brew from a different direction. Put A Boot On is a collaboration with Kevin Williams, an Indigenous artist and the owner of the wattleseed farm Ngayirr Burrawii, which means Sacred Tree. The amber lager features artwork by Kevin and pays homage to the traditional patterns and sand hills of Waradjuri Country and is also inspired by a story Kevin was told by an Elder, “Put a boot on, I want to talk to you." The beer uses some four kilograms of roasted and ground Acacia Victoria wattleseed from Kevin’s farm and with Vienna and Caramunich malts also a feature, it quite closely resembles a classic Vienna lager thanks to the light toffee, bready and somewhat biscuity notes at play. The wattleseed meanwhile provides a substantial nutty and earthy flavour with the slightest edge of the raisin or dried cherry aroma akin to what you'd pick up from a cold drip coffee.

It's not the only bottom-fermenting beer the brewery's been creating either, with Bambino an Italian Pilsner dry-hopped with Hallertau Mittelfruh and Perle. The lean and clean creation features a hit of spice and aromatic and flowery characters with a touch of pine and a building, bitter finish.