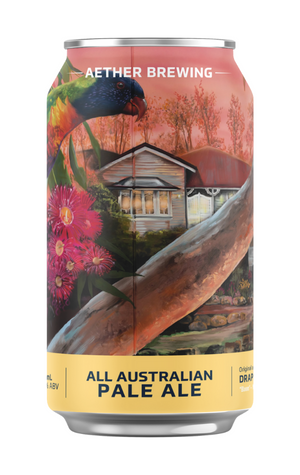 In 2021, Aether made a limited hazy pale ale called Southern Haze. It proved so popular that the brew team reworked the recipe a little and turned it into this year-round beer - the All Australian Pale Ale. While Southern Haze can showed Aurora Australis, All Australian Pale Ale can bears an artwork† of a rainbow lorikeet on a red glowing gum in front of a Queenslander home. Can’t get much more bloody ‘Strayan than that.

As for the beer, it’s what you're looking for in an Aussie pale. It’s juicy, but not sweet; the Galaxy, Topaz and Aussie Cascade hops bring a mix of stonefruit and citrus with an edge of resin. It’s flavoursome, but not something you have to stop and think about. It’s smooth, but with a lick of bitterness. It’s sessionable, but it’s far from boring.

† If you notice a seam in the art, that’s because the picture is actually a huge wall mural.