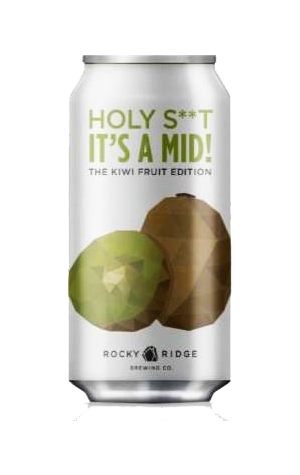 Already in its short existence, Rocky Ridge has made a considerable impact on the WA beer scene. Besides almost out-collaborating every other brewery in the state, the steady tide of limited releases has left little room for what most would consider a traditional core range. This seems a tenuous means of building a brand and, to a degree, it probably would be for owner/head brewer Hamish Coates if it wasn’t for the consistently high quality of his releases.

Which brings us to the second iteration of Holy S**t It’s A Mid – The Kiwi Fruit Edition. The first, draught only, expression featured mandarin and responsibly quenched many thirsts during the spring/summer beer festival season. For the current release, more than 300kg of local kiwifruit was sourced from a local farmer who was otherwise going to have to pay to dump it because it didn’t meet supermarket specifications, making it a move that sits well with the brewery’s sustainability ethos. A small addition of Rocky Ridge grown Goldings hops, a yeast culture from the Rocky Ridge dairy and Margaret River sea salt complete the picture.

The result is a highly drinkable, medium bodied beer with acidity supporting its restrained fruit and salt characters. And, in what's becoming true Rocky Ridge style, it's flying off the shelves.