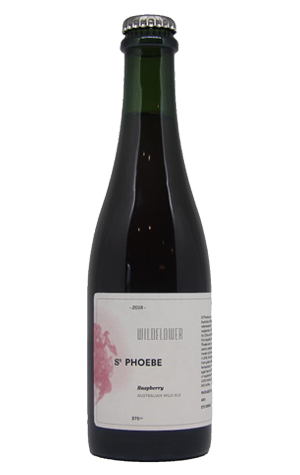 Little more than three weeks after their last limited release fruit beer, Wildflower has launched another one. And, sigh, it’s just as bloody lovely. Then again, well over a year in, with the barrel stock having expanded significantly and the core Gold blend – from which so many other beers are derived and dependent – arguably having never tasted so good, you kind of have to accept that if they started fermenting their beers with a bucket of turnips it’d still taste great. Doing it with raspberries was hardly likely to go wrong.

So we have St Phoebe, a beer concocted in honour of the birthday of the first daughter of brewery co-founder Chris and his wife. It is, in short, a blend of three old Gold blends and more than 150 kilograms of raspberries from Coffs Harbour. That proffers abundant raspberry character on the nose and on the palate, adding a general familiarity and approachability to counteract what may be, to some at least, a confronting funky character and generous tartness that’ll have you sucking in your cheeks trying to extract the last remnants of flavour long after the last drop has been drained from your glass.

This is the kind of beer you’re almost conditioned to believe is made exclusively in Belgium and comes in packaging you won’t be able to disentangle without a reasonable comprehension of Flemish. That we’re able to get it so readily from a warehouse in Marrickville really is worth more than a second thought.