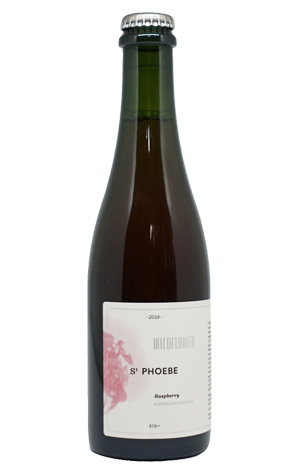 Phoebe is blend of five Gold barrels and one Pilsner aged on a few hundred kilos of Coffs Harbour raspberries for three months before being packaged and bottle conditioned for a further three-and-a-half months. Raspberries are generally wonderful fruit to brew with. The colour and flavour comes through nicely with even a fairly low fruiting rate. It also tends to add a degree of tartness to the finished beer.

This can be a slight issue, though, when the beer is relatively tart as it is. In order to try and smooth out the acidity of the 2019 release, Topher Boehm opted for some of his older barrels. For comparison, the average age of the 2018 barrels was around seven months and 2019 is just over a year.

The finished beer is considerably sharper than most of the other in the Wildflower portfolio but here it mellows out quickly. Drinking Phoebe, for this writer at least, is reminiscent of dipping a Redskin into Wizz Fizz. It’s a veritable tide of raspberry and sherbet which starts bright and ends on a moreish savoury note.

Like Cosmo Kramer from the best sitcom of the 90s, the berries will elicit the applause and whoops from the studio audience, but literally anyone with half a brain can see that the effervescent, sherbet acidity of Elaine Benes is the real hero here. Please don’t let that clumsy metaphor put you off, however – it’s actually a very lovely beer.

Also, Friends is wet, hot garbage. Do not @ me.