Beer Wildflower As It Were 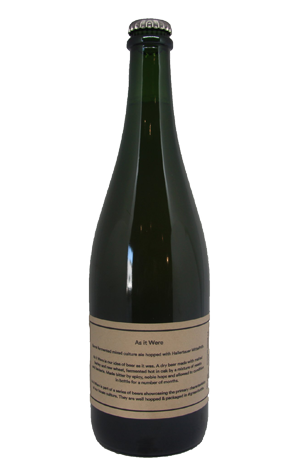 To know what this beer is is more about knowing what it’s not. Rather, we’ll never truly know what it’s meant to be and only what it is, as it were. This is Wildflower’s salute to a classic Old World saison, the kind they, the peasant toilers, would drink or might have drunk “back in the day” but which we cannot, but for the development of time travel, truly confirm. Certainly, some highly regarded examples exist, occupying the upper reaches of the unimpeachable pantheon of classic beers, but this is just a tribute, so to speak. Beer as beer used to be – as it was, or could have been. Who really knows?

What we do know is that As It Were was barrel fermented at the mercy of the ambient temperature, then re-fermented again in bottle for several months. The grain comprising the base is an all NSW blend, single origin strains of cereal sourced from across the state. There are more hops – the noble Germanic Hallertauer Mittelfrüh variety – in here than most Wildflower beers, so there’s more emphasis on the bitterness and spice than the underlying tartness which characterises so many of Wildflower’s gold coloured beers, though it’s still typically dry and refreshing.

This is the first edition of As It Were but there will be more as they strive towards fulfilling a reimagined reality. It should be an interesting journey.