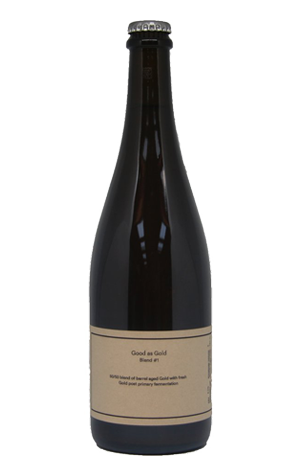 Something old and something new makes Wildflower’s gold blended brew. Good As Gold is the latest in the brewer/blender’s sub-series that, starting with July’s Keen As Mustard, takes its naming convention from raiding the long list of Aussie lexicon.

It’s a half-half kind of beer, where they’ve taken the ever-versatile barrel aged Gold base beer and blended it with a fresh version of itself. That mix makes it feel like it's absorbed and released more of the initial power of the primary fermentation, creating a beer that’s fresher, punchier and has more bitterness than the standard barrel blend. To that end, it perhaps doesn’t have the complex funkiness either, but it was never going to. That’s not to say its neither funky nor complex, just in comparison.

Indeed, it still has all the elements that make Gold such a lovely beer to drink – the brightness and liveliness, the creamy head, the citrus tang, the refreshing feel. If this was your everyday beer, every day would be a good one.