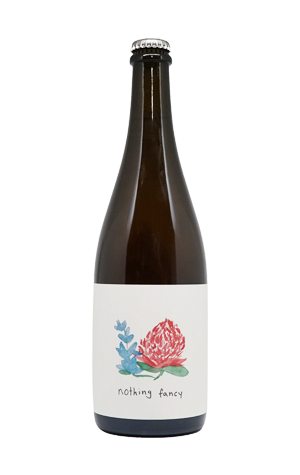 “Yeah, I’ll just have Nothing Fancy, thanks mate,” he says, after leaving work early and walking through torrential rain to get to an old iron foundry, in an industrial area, specifically to appreciate a limited release, barrel-aged wild ale in a stemmed glass.

At the launch of this Wildflower collaboration with US farmhouse superstars Jester King, Wildflower doyen Topher Boehm radiated an aura of utter contentment. Five years ago, Topher interned at the Jester King brewery, nestled amongst 165 acres of Texan hill country. That invaluable experience was a pivotal factor in Wildflower opening its doors in 2017.

Less than three years later, Wildflower make some of the most sought after liquid in the country. Last year there was the award for best drink in Australia at the 2019 Drink Easy awards,; for the last couple of years, Wildflower have sat atop the list of highest-rated Australian breweries on beer rating app Untappd.

With the release of Nothing Fancy, it feels like Chris, Topher and their team have closed the loop on an incredible opening chapter of their story. In August 2018, Jeffrey Stuffings from Jester King made the trek to Sydney with a bag of aged hops and a jar of the Jester King house culture. Using Wildflower Gold as the base recipe, the beer was hopped with the aged hops, a bit of Motueka, and fermented with a mix of both house cultures in oak where it was left for a year before blending and bottling.

It’s an absolute travesty of a cliché to say that a collaboration beer is the best of both worlds but I’m not a good enough writer to avoid it. For a beer that’s almost 18 months old, it's obscenely fresh and bright. Initially it comes across like Gold but with a slightly more subdued acidity. There’s a mélange of lime, melon and stonefruit that rolls into oak, funk and just a touch of cheesy hops. Despite having this on tap at the venue, my first thought was that I couldn’t wait to take home a couple of bottles and share it with the grousest people I know.

It may not be fancy, but bugger me if it’s not an absolute joy from start to finish. I tried to tell Topher as much, but, as usual, he was busy being bailed up and embraced by every second person to walk into the joint. And rightly so.