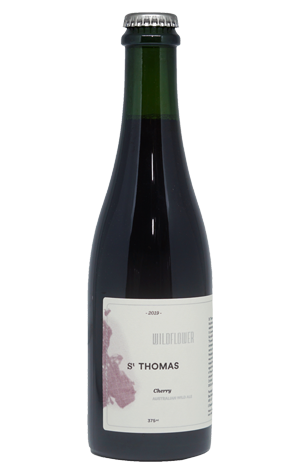 If you’ve been to the Marrickville home of Wildflower Brewing and Blending lately, you’ll likely have noticed enough barrels to keep a cooper in business. The steady increase in barrel capacity has meant there’s not only more room for delicious Amber, Gold and Table beer, but potential for larger and more frequent one-off releases and the annual Saint series.

The first of the last of these to appear in 2019 is St Thomas. Like last year’s, this vintage is comprised of an Amber base with the addition of sour Morello cherries from the Thornbrook Orchard in Orange. On a side note, despite the abundance of fresh fruit and produce that can be found in Orange, there are no oranges because it’s too bloody cold. Absolute insanity.

Anyway, the Amber base and cherry additions are where the similarities end. Last year, it was a case of 200kg of cherries and three barrels; this time it’s a literal tonne of cherries and seven barrels. For those playing at home, that’s 214 percent more cherries [Are you trying to create your own quiz show trivia questions here, Judd? – Editor]. This incredible fruiting rate wasn’t intentional but if it wasn’t for Wildflower, those hail damaged cherries would have been destined for the bin or, God forbid, some sort of cherry jam or conserve. Disgusting.

The sheer number of cherries made de-stemming completely unfeasible so, after a bit of consultation with the UK’s Kernel Brewery, the decision was taken to leave the fruit whole with stems attached and pits firmly in place.

The result is a genuinely fun experience: every single aspect of this beer is outrageous. Clearly, the overwhelming character is that of the cherries but there’s so much more going on too. The stems lend a strong aperitif like flavour and aroma while there’s a sort of dark chocolate and marzipan/almond theme running underneath it all.

Thommy finishes bone dry with an intangible moreishness that means once you pick up the glass you’re unlikely to be putting it down again. A beer like this will likely evolve substantially with a bit of age so, for all you geeks with a cellar, you could do worse than putting a couple away for later.

UPDATE: It turns out the barrels weren't the same format as 2018 so the fruiting rate didn't actually double, with some 300 litre hogsheads rather than 225 litre barriques introduced.

Launching at Bitter Phew on July 4