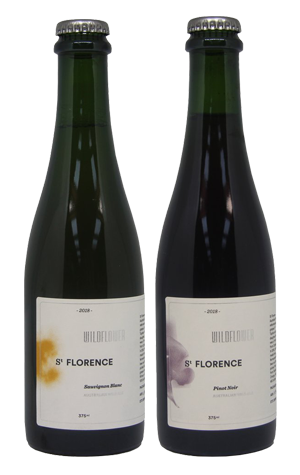 When Wildflower launched St Florence in 2017, it was a bit special. The beer is named in honour and was released in celebration of the birth of chief blender Topher’s first child. It also represented Wildflower’s first foray into fruit additions in their beer (in this instance wine grapes). And it was voted one of the best new NSW beers of the year by our panel of contributors and industry folk. A year on, Florence’s fusion of beer and wine worlds has returned in two ways with sauvignon blanc and pinot noir varieties.

It’s quite the process making these beers. First you need the base. Wildflower has lots of that, barrels of beer in various stages of being, stacked high, ready for blending. Then you need the fruit. All of it came from the DeSalis Winery, out west in Orange. The pinot noir grapes were picked early, as if making rosé, one of the ideas being that the acidity would marry up well with the blended base beer. The savvy grapes were picked closer to full ripeness. There’s an old adage that wine is made in the vineyard – that you need good fruit to make good wine. The smell of these beers suggests the fruit was good.

The red grapes were pressed and two barrels worth of juice went straight into French oak to ferment separately. The remaining fruit underwent carbonic maceration. In simple terms, they put it all into a tank, closed the lid and left it for a few weeks to ferment naturally from the yeasts carried from the vineyards on the fruit; synergy with the wild yeast that underpins Wildflower’s approach to brewing. Minus the initial pressing to extract juice, the same process took place in another tank with the white grapes.

Three weeks later they pulled the pinot juice – now pretty much wine – and dug out a barrel’s worth of still intact bunches, pressed ‘em and put all that liquid aside for safe keeping. Inside the tank remained the mushy fruit dregs, which they topped up with two old Gold beer blends, left for three more months then put it straight into bottles. The same thing, more or less, happened with the white grapes, the exceptions being that some of the free-running juice was added to one of the two aforementioned French oak barrels and the fruit was left to co-ferment for three months with various blends of Wildflower’s Lager beer.

So we now have several things on the go. There’s the straight pinot rosé, a spritely and fresh wine that’s available on tap in Wildflower’s cellar door. There’s the pinot/sauvignon blanc wine blend that’s not yet been released. There’s the pinot juice that was set aside for purposes yet to be revealed. And of course there are the two beers. St Florence Sauvignon Blanc is the most similar to the 2017 version, bringing the best of the grape’s vinous qualities – the sharp citrus fruitiness and herbaceous character – to add to the Gold beer’s yeast-driven complexity. St Florence Pinot Noir is full of brightness and juicy berry flavours, delivered with both sourness and softness.

With Wildflower having been on such a busy run of releases recently – fruit ferments, celebrations, collaborations, colloquialisms – it’s easy to imagine that some of the initial excitement about St Florence might have worn off since last year’s release. That would be a shame because this year’s is arguably better and more refined. And there are two of them.