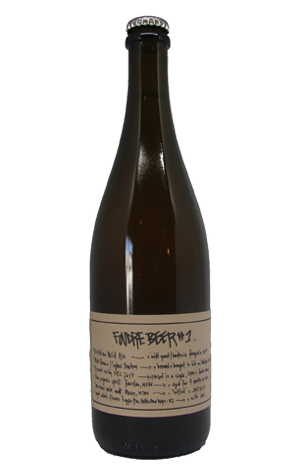 You’ll notice, if you care for such details, that there are two especially large oak barrels at Wildflower. They’re called foudres and each holds around 2,500 litres of liquid. One of them belongs to Wildflower. The other belongs to drinks writer Mike Bennie who realised a promise made in the early days of Wildflower to, one day, stake out a small corner of the place to be his own. In December of 2017, both were filled. Wildflower’s would go on to house the Solera series. Bennie’s would produce the Foudre Beer. This is the first release.

It’s a beer that’s almost entirely a product of New South Wales. The grain base is a blend of raw spelt and single origin malts from around the state. The yeast is all wild but native, collected from fruits and flowers some years before (the same culture used in beers like the Wildflower’s all NSW Waratah). The foreign element here is the hops: Fuggles and Pacific Hallertau varieties, both grown in New Zealand. They are, though, old hop flowers, as is the prescribed method for producing these old Belgian style spontaneous fermented beers.

The beer spent seven months in barrel and, according to those following its progress most closely in the barrel room, “went through some pretty strange stages”. But, after a further three months conditions in bottles, it’s turned out just fine. The acidity is sharp and strong. There’s the character of Brettanomyces, with all its subtle complexities. But it’s the balance between all that which is key, packaging up all the intricacies into what’s ultimately a very clean and refreshing beer.