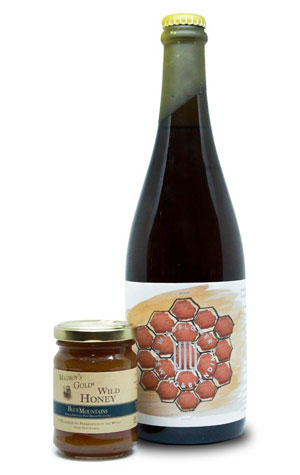 “Oh, it’s some kind of honey beer or something? Big whoop! Anyone can throw a bloody drum of Capilano into some wort. It’s all sugar anyway, that shit just ferments right out, no worries.”

Post brood honey is produced using as little human intervention as possible. Tim and Emma Malfroy utilise Warré hives which allow the bees to build their own comb from scratch, like they would in a wild hive. All other commercial honey is produced in either re-used frames, plastic cells, or sheets of processed beeswax with embossed cell patterns. This also means that, by the time the Malfroy’s harvest the honeycomb (in this case, three years later), it’s already been used to raise young store pollen as an open honey food source. And, finally, it’s capped as a backup food source. What this means is that the harvested honeycomb not only contains honey that is genuinely surplus to the hive’s need, but also the pollen, propolis, wax and other bits and pieces leftover from its previous uses.

Finally, the Malfroys cold press the honey from the comb, which leaves a big hunk of still honey-laden wax that would usually be washed and melted down for wax. This is where Wildflower comes in. Instead of washing out the remaining honey and melting it down, the honeywax was added to some of Wildflower’s aged Gold Blend and left for a month for the house culture to get stuck in. It was then bottled and naturally conditioned with some extra honey.

The resulting beer is a perfect amalgam of two products, lovingly produced by two family-run businesses trying to produce the highest quality produce using old world techniques and a shitload of care. The beer appears to pour slightly thicker than normal (it is 2 percent ABV stronger) with the honeywax character a prominent first arrival. There’s the classic Gold aromas of lemon peel and creamy oak with an accentuated floral overtone. It’s definitely more beeswax than honey and finishes dry, tart and subtly spicy.