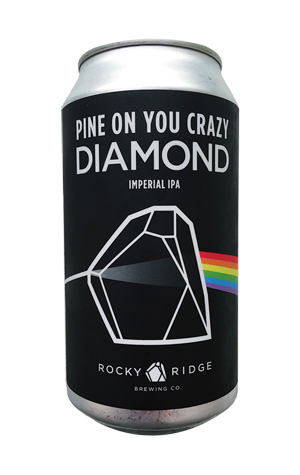 Putting the classic rock back into Rocky Ridge, this Pink Floyd-referencing double IPA collaboration first appeared during Petition Beer Corner’s weeklong Collabosaurus event for WA Beer Week 2018. While the eponymous song was allegedly a stab at redemption by the group for ejecting founding member Syd Barrett due to mental health and substance issues, the beer has no such emotional hang-ups – this is celebratory drinking with a booze level to match.

The style is something of a sweet spot for the brewery, which is probably known more for prolific collaborations and a rapid release program. Subtle haze presence teases, however owner Hamish Coates is adamant this is not intentionally NEIPA-esque, rather a byproduct of making a beer he wants to drink, a notion that echoes The Alchemist’s John Kimmich whose hop debris beers launched the turbid revolution. Pine On’s patent dank pine plays well with tropical and citrus notes plus a light malt sweetness that weaves like Gilmour’s licks.

Whether intentional or not, this "Rock" series makes a tidy audiophile duo when considering Pine On’s baby brother, last year’s Stairway to Resin. With this in mind, one wonders when we’ll see the appearance of Stange Days - New World Pilsner, Sunshine Of Your Trub – Golden NEIPA or, perhaps, Oude-doo Child (Slight Return) – Oude Gueuze.