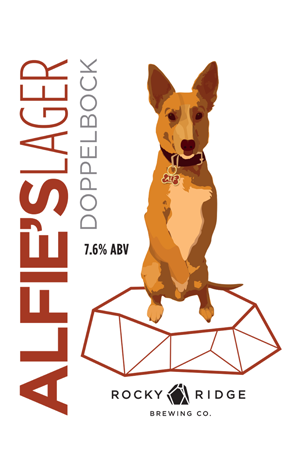 Afie's Lager – a doppelbock – was brewed in honour of a Rocky Ridge family pup. Alfie is the trusty brewpup of head brewer Ross Terlick and spends his days helping on the Rocky Ridge brewery and farm.

The beer itself is pretty self explanatory: a gutsy doppelbock brewed to a generous 7.6 percent ABV and 22 IBU. Don't let the big numbers worry you, though, this lager is well balanced and oozes drinkability. Pronounced malt and sweetness are key players on the nose and palate alike, with generous complexity and a rounded hop bitterness.

It's a hearty tribute to a hardworking crew member and a style not brewed that often Down Under but carried out well by Ross and his team here.