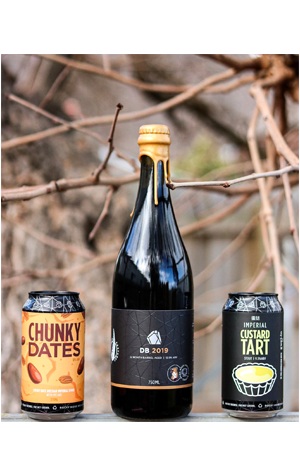 An imperial stout brewed with dates, created in collaboration with a cookie shop and released alongside not one, but two limited edition imperial stouts... A release this massive wouldn't be attempted by many but the Rocky Ridge team are determined to make this uber-hyped triple release one of the most memorable of the year.

Get Chunky takes centre stage: a beer brewed with pecans, lactose and 200kg of dates that were painstakingly caramelised by the brewery team before being added to the boil. This decidedly decadent beer comes in at 10 percent ABV, was brewed in collaboration with Get Chunky and Mane Liquor, and arrives loaded with luscious toffee, caramelised sugars and a slight nuttiness.

Next in line for the titanic trio is an imperial version of 2019’s Custard Tart Stout, brewed alongside Hong Kong operation Gweilo. The new version has been nudged up to 9.5 percent ABV before a hefty addition of whole vanilla beans and plenty of lactose give this pastry style stout a thick body that carries sweet biscuit, vanilla and a touch of caramel.

To close out the collection is the return of Rocky Ridge’s esteemed DB Imperial Stout. This reiteration has been lovingly barrel-aged in a blend of shiraz, merlot and whisky barrels before being elegantly packaged in 750ml bottles and sealed with golden wax. Full of dusty cacao and gentle oak, along with a long, viscous finish and 12.5 percent ABV, this one is a perfect warming winter sipper.

Rocky Ridge have developed a reputation for not doing things by half measures; dropping three imperial stouts (alongside a limited edition cookie for those who get in early) certainly fits their inclination to satisfy thirsty punters with compelling and surprising releases. All three are limited in number, but ample in every other way.

Launching at the Cellar Door on July 25