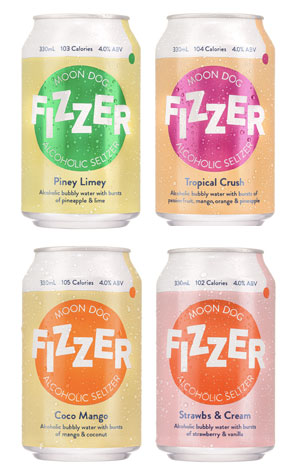 We're still in the early days of hard seltzer's invasion from the other side of the Pacific, where the alcoholic flavoured water craze has gone, well, utterly crazy in the past few years. While I've not tasted every Aussie variant to arrive to date – forgive me – those that have come my way have typically shared common traits: pastel or jaunty, approachable colours, typically on a white background; names that look to conjure joy in the manner of a yoga session on the beach as the sun peeks over the horizon; prominent declarations of their low carb / low cal contents; and varying degrees of fruity flavourings.

But you can always rely on Moon Dog to shake things up.

Sure, their cans fit the colour scheme, have their calorific content – from 102 to 105 calories per can, which I'm pretty sure is in the same ballpark as a 4 percent ABV beer, but whatever – displayed around the top of the cans, and tell you they're low carb, low gluten, vegan-friendly and so on. But then the fun (and honesty) starts.

There's the tongue in cheek name: Fizzer. Sure, it's descriptive. But it's also Aussie slang for failure or fiasco. Then there's the way they're described: "Alcoholic bubbly water". And then there's their nature; we might be in the early days but I'm happy to declare we have Australia's first pastry seltzer among this opening quartet.

It's also worth pointing out at this stage that Moon Dog are bloody serious about the seltzer space – one of the co-founders is on the record saying he figures they may end up producing more Fizzer than beer in the long run, and they brew a lot of beer. But what of the first Fizzer foursome?

Piney Limey is one of two closest in spirit to the other locals we've tried, albeit with the sweetness of the pineapple giving it a broadness of aroma and texture you wouldn’t get with just lime. Indeed, it’s more pineapple with a slice of lime than the two on equal footing, with that sweetness lingering. Tropical Punch is indeed the punchiest – hitting you with an olfactory-tickling perfume blast featuring passionfruit, mango, orange and pineapple yet feeling like there's mixed berries in there too. It reminds me most of the mixed fruit yoghurts I had as a kid.

Then we move ever further into afters territory. Coco Mango might be the driest aroma wise, with coconut dominant, yet the overall impression is one of coconut milk extract poured over slices of sweet mango. And then we enter Pastrytown – or should that be Lollyland? Strawbs & Cream is awash with vanilla, thus comes across as creamy as all hell. Picture one of those Strawberry & Cream boiled lollies or whatever the Aussie equivalent of Frijj strawberry yoghurt drink is, swirl it into carbonated water that will get you slowly tipsy, and there you have it.

What has the world come to?

Note: there may be other hard seltzers released by Moon Dog, but we won't be writing about them. We're happy to let readers know which breweries are playing in this space, but we're a beer website and need to focus our attention on the diverse array of beers being released.