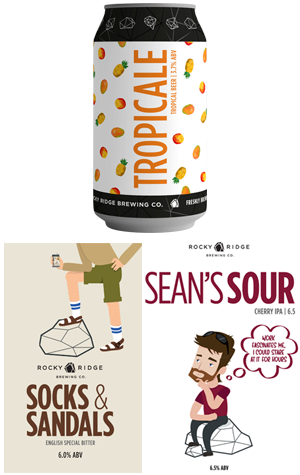 Rocky Ridge’s Tropicale was built with Summer BBQs in mind; designed to be easy-drinking in regards to both flavour and alcohol content, it registers modest 3.7 percent ABV and 15 IBU, but is heavy on the tropical punch vibes. Pouring straw-coloured and hazy, guava, strawberry, passionfruit and pine billow out of the glass while the medium, silky body easily transports comparable flavours and a very mild mid-palate bitterness. Some tropical fruits persist in a finish that's otherwise uber-clean, filling thoughts of the next sip with zealous anticipation.

Socks & Sandals would be considered a fashion faux pas by most, but the team at Rocky Ridge think the style reserved for uncles and five-year-olds, is coming back, along with the oft forgotten English Special Bitter. The team is championing both, releasing a limited run of Socks & Sandals in collaboration with Bunbury craft beer stalwarts Mojo’s.

It's a generously-hopped ESB that clocks in at a solid 6 percent ABV. Bold pine, citrus and spices dominate the nose while Special W malt and oats contribute body, haze and some complex caramel character. A blend of noble hops and Aussie Eclipse hops yield citrus and spice flavours that carry through the medium-long finish to create a limited run likely to prove far more popular than the namesake fashion trend.

And completing a mini-end of 2020 Rocky Ridge roundup is Sean's Sour, which was brewed for a bloke named Sean in recognition of his hard work. By contrast, the beer itself isn’t hard work at all. Bursting with non-typical IPA flavours of tart cherry and a touch of coconut, it’s a cleverly brewed hybrid style that meets in the space between hoppy and sour.

Rich cherry character dominates the palate and carries over to the nose, mingling with citrus and light coconut aromas, before the hopping regime adds some citrusy, pine character without conflicting with the prominent tartness and bright fruit. A medium body, lingering finish, plus a touch of funky yeast character leave you with an easy-going sour IPA with a stack of character.