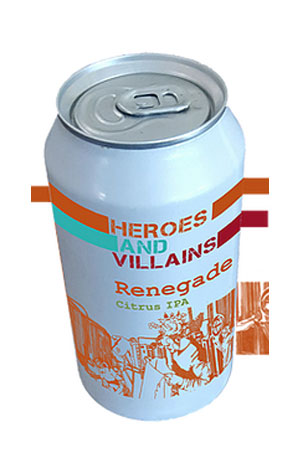 Renegade has become a tribute to once difficult beer within the Heroes and Villains lineup.

“It’s called Renegade because, when we used to make the old IPA, it pushed the limits of the system so hard that it never quite worked out the way we wanted it to," head brewer Shannon Mizen says with a laugh. "Something went wrong with every brew. So, we named this one after that, rethought our processes and actually got it right.”

This frustration plays out on the label, but in the can there’s a generous, citrusy IPA, which pushes grapefruit and tangerine tones, courtesy of Citra and Idaho 7, atop a medium malt weight. Bitterness asserts, and the length runs crisp, however Renegade – despite its name and origins – is actually rather sessionable for a beer of its stature.