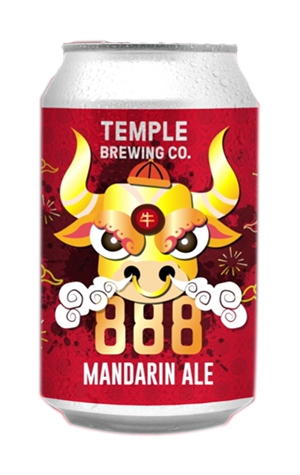 Now enjoying its third iteration, Temple Brewing’s celebration of the beginning of another Chinese New Year, the 888 Mandarin Ale, continues to change with the passing of another lunar year. The first 888 was a lion-backed saison – which you can read about here – while the next saw Temple switch the recipe to a pale ale for the year of the rat. Now, for 2021, the Brunswick East brewery has marked the start of the year of the bull with another mandarin pale ale, though with changes beyond a new colourful can.

For one, they've dry-hopped heavily with Eclipse from Hop Products Australia; a hop named last year and known for its impressive mandarin notes. Not content with just those changes, Temple upped the amount of mandarin used too, adding some 70 kilograms of dried mandarins, along with fresh mandarin juice. It makes for a clear, light orange and lucky pale ale that has a dry and clean malt profile and soft bitterness, but where sweetness from the mandarin packs a punch and drives the beer's flavour.