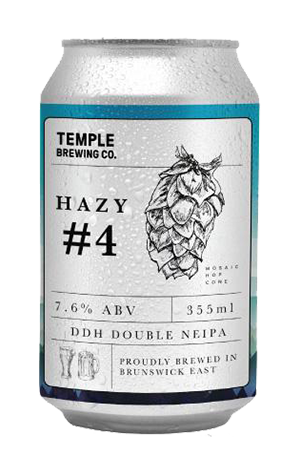 Temple Brewing started making hazy IPAs a little later than most, with the brewery only releasing their first - the aptly titled Last Train To Boston - at the start of 2020. The Brunswick East brewery has been making up for lost time though, launching their Hazy Series at the close of that year with the promise to release four beers focused on hops and haze. The final member of that series was launched at GABS 2021 but has also been given a wider release in cans that share in the scientifically stylized looked of the other Hazy releases.

Contained within #4 are whirlpool additions of Ekuanot and Mosaic (in the shape of INCOGNITO, a concentrated liquid hop product from John I. Haas designed specifically as a whirlpool addition) and an impressive dry-hopping rate of 24 grams per litre of Citra, Amarillo and Mosaic (here it came in LUPOMAX, which is also from John I. Haas and is effectively concentrated lupulin pellets which aim to provide the full hit of hop flavour without as much vegetative matter).

Additionally, there’s a large amount of rolled oats in the beer which take the hazy and pale yellow beer into really smooth and quite thick territory which allows those hop flavours to leap off. First off there’s a really strong whack of stone fruit that sits somewhere between nectarine and apricot and that's followed by a wider tropical mix of mango, pawpaw and melon and a softer citrus note too.