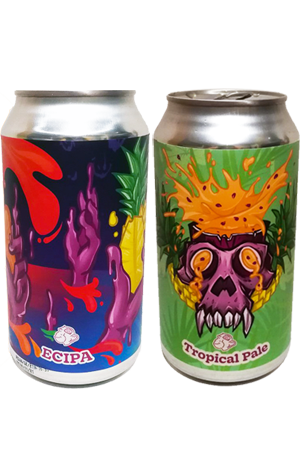 Cheeky Monkey’s Surf Break series was a well-received and frequent feature for WA's craft drinkers throughout 2020 and, just two months into 2021, we’re seeing the first of the year's releases with an East Coast IPA brewed in honour of famous Gracetown surf break, Lefties (or Lefthanders).

Lefties pours with a moderate haze, muting an otherwise vibrant orange hue. A dense but short-lived head dissipates with aromas of orange, mango and lemonade, leaving behind a fine effervescent carbonation. A pillowy and creamy mouthfeel comfortably carries a moderate and piney bitterness, with flavours of pithy orange, candied citrus and pine present in abundance.

The bright hop profile in Lefties comes courtesy of fresh, Oregon grown Strata hops, offering up an abundance of tropical fruit character thanks to heavy-handedness in both kettle and fermenter. Old school Simcoe adds piney and grassy characters while some gentle overripe stone fruit esters also add fruity complexity to this bold East Coaster, all while cleverly hiding its 7.5 percent ABV.

Lefties is a brewing feat; with its high alcohol, excessive hops, haze, thick mouthfeel and residual sweetness it should be big, brash and a little scary, but it isn’t. It’s balanced, measured and cleverly drinkable despite its bold character. A credit to the Cheeky Monkey brewers.

Released alongside the IPA is Tropical Impact, a can that isn’t just filled with fresh and fruity ale, but also wrapped up in striking new artwork. It's a new creative take for the South West brewers who seem to be the face of evolution in WA craft brewing.

The beer is classically Cheeky Monkey inside the can: brewed without fault, demonstrating a perfect utilisation of hops, nailing the intended style. The can art, however, suggests that a slightly more "adult" marketing direction for the exuberant brewers may be on the horizon.