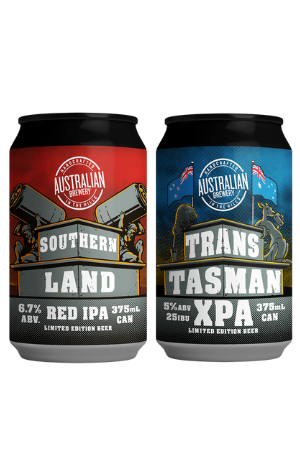 When the brewery is called Australian Brewery, it shouldn’t be a surprise when a few of the beers make reference to this big ol’ country of ours.

Southern Land Red IPA is no doubt a shout out to the red dirt that covers such great expanses of the Australian outback. Once you get the stuff on you – in your car, in your clothes, on your skin – it’s an ordeal trying to get it off. This beer is actually a darker colour than said red dirt, almost pulling up a deep brown. But it’s equally determined to stick with you. Resin pulls you in first, but it’s soon joined by overripe fruit and punchy zest, all wrapped up in burnt caramel that gets under your skin. The final impression is of a strong, electrifying bitterness, like you’ve just bitten a battery (in a good way). [Next time we catch up, can you show me the good way to bite a battery, Mick? – Editor]

The Trans-Tasman XPA is more of a light-and-bright experience, with a mix of Aussie and NZ hops giving their fireworks burst of citrus and tropical aroma and flavour up front before settling into a calm bitterness. If you’re the creative kind, you can even take inspiration from the chef at Australian Brewery: he used Trans-Tasman in a rosemary lamb pie, matching the citrus notes of the hops with the sweet flavour of the slow-cooked lamb.

This beer is in its fourth year of commemorating ANZAC Day (brewer James being a rifleman in the Australian army), and the brewery continues to make a donation to Legacy Foundation for every can and schooner sold.