At roughly this point last year, as we started to compile the Best New Beers Of 2017 – So Far an unexpected issue arose. Casting an eye over the new releases from Victorian brewing companies over the previous six months, it was tougher than expected to pick out five that had really caught the eye.

Fast forward to March this year and the situation was quite different: "Just how will I whittle down my own best new releases to just five?"

Whether it's an anomaly or a sign of rising standards (hopefully, the latter), there certainly seems to have been a generally higher standard of beers coming our way in 2018. Sure, there's still the odd duffer that requires direct feedback to the brewers rather than appearing on the site and many more that tick boxes without dazzling. But, as the industry continues to expand, to explore new avenues and to push the beer sphere into ever more intriguing shapes, there does seem to be more really good beer in which supporters of the local industry can immerse themselves.

At the same time, it doesn't make it any easier to put together a snapshot of the best new releases at any one point in time (although it does give us an extra reason to do this mid-year assessment, if only because it gives us a reference point when we do our end of year review). So, this year, we cast the net wider than before and ended up collating responses from more than 60 writers, bloggers, venue owners, bar managers, retailers and beer enthusiasts.

We set them a (relatively) simple task: send us your top five new releases from your home state or territory plus the three from elsewhere in Australia that have impressed the most. No explanation needed; just the beers. By new, we meant a totally new beer or a new version or vintage of a prior release.

More than 200 different beers received at least one vote, with all votes combined to compile a national Top 16 (yes, it's a weird number, but there were so many beers sharing the same tally it felt like the best cut-off point) plus top fives for each state and a top three for ACT. NB: While there is a local brewing scene gathering steam in the Top End, we decided to leave that for the end of year.

It was a lot tighter at the top than in 2017 – there's a tie in first place and several beers sharing the same votes as you go down the top 16. As for their makeup, few will be surprised to see a collection dominated by big IPAs, NEIPAs, barrel aged beers and other sour styles plus a trio of big, dark beers. Three of this year's GABS beers make the top 16 too.

There were some other interesting takeaways, notably a number of brewers with beers in the top 16 that picked up far more votes outside than within their home state. Balter's IIPA, for example, received just one nod from within Queensland, while top rating beers from the likes of Modus Operandi, Boatrocker, Hawkers, Big Shed and Pikes found more favour across state lines. Perhaps it's down in part to novelty, maybe there's a more localised form of tall poppy syndrome at play. Or maybe it's merely a coincidence.

A number of breweries recorded multiple votes but saw them spread across a wide array of beers – Wayward had seven beers that registered at least one vote; Batch and Black Hops six – and it's also interesting to see a number of breweries from last year's top 13 back for more.

One small change to point out from last year: we've only included a brewery's top-scoring beer in these lists, but have indicated where a brewery had a second beer with enough votes to have otherwise made their state or territory Best Of.

Notes: As we've said in the past, but which bears repeating, there's no perfect method when compiling a poll like this. Beers with broader distribution are likely to be favoured, while, in this particular format, brewers in states where there are less brewers and, thus, less beers face less competition. But we hope that, by casting the net far and wide and including writers and venues operators based outside the capital cities, we've created as fair and honest a snapshot of the year in beer so far as we can.

Here's the top rated beers by state. We've indicated the beers that accrued the most votes from contributors within their own state in bold.

Beyond this, the votes were spread far and wide, with five different Little Bang and Big Shed beers garnering at least one vote and beers from the likes of Pirate Life, Wheaty Brewing Corps, Left Barrel, Mismatch, Beer Garden Brewing, Vale, Fox Hat and Prancing Pony all appearing.

Outside this top five, the above breweries featured strongly in next few Victorian beers with the most votes. The first beer not by this quintet was Hop Nation's Market NEIPA.

It's worth adding here that Modus and Wildflower, not to mention Akasha, gathered some of the biggest total votes across all of their new beers too. Wildflower garnered 19 across five beers, Modus 15 across four and Akasha 13 across five.

We imagine this might raise a little chatter, with only one of the votes for Balter's IIPA coming from its home state voters, who voted in greatest number for Aether's Hemp Double IPA, initially a one-off for an event at Bloodhound during Brewsvegas then returning in cans.

More cause for celebration for BentSpoke, whose GABS beer and World Beer Cup medal-winning Red Nut shared the most votes in ACT. Two from Capital and Wignall's Cole Porter all shared the same number of votes, while Pact Beer saw its votes spread across three releases.

Most Beers By Brewery

As mentioned at the top, there are some breweries for whom affection was spread across their range. Here's the breweries that landed the most individual beers in the long list.

So there you have it: a little snapshot of some of the best new releases from the thousands that have left Australian breweries this year. Thanks to everyone who took the time to send in their votes, which saw nods for some very new and lesser know operations too, be it the three beers from Brisbane's Revel that landed in the long list, the two for near neighbours Range, or appearances by Seven Mile in Ballina, Cornella Real and Flight Bar's Chicken Twist, Tallboy & Moose, Indies champs Moffat Beach, The Mill, Dollar Bill, FogHorn, Block 'n' Tackle and even Fluffy Jeff from SA's Libation Army.

Now back to checking out the latest round of samples...

Squid Rising image in the montage at the top from Goodtimes Craft Beer's Instagram. 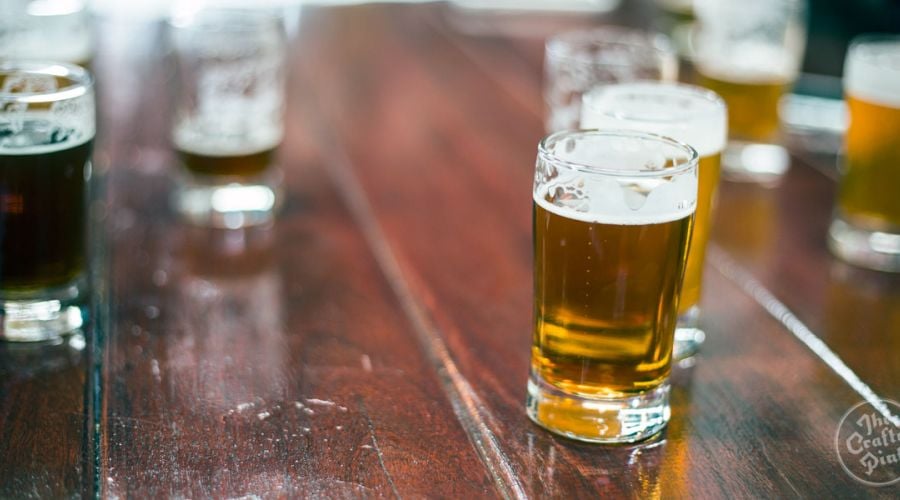