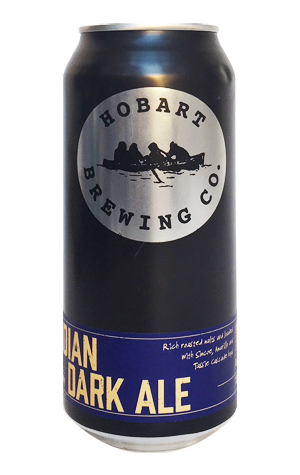 Hobart Brewing Co's head brewer and co-owner Scott Overdorf started his professional brewing career on the canning line at Oskar Blues back before the first wave of Australian craft beer had even had time to collapse in a heap of poorly planned businesses and dodgy beer. So it should be little surprise that he likes to put out beers with origins in that part of the world, be it his Colorado IPA or this spin on the Cascadian Dark Ale.

The beer has been around on tap before but made the transition to tall tinnies in 2018. They come packing a deeply dark brown beer, one that's sits apart from the black IPAs that try to trick the sense by pouring dark and smelling and tasting pale; here, the roasted and specialty malts are as much part of the story for their flavour and aroma giving qualities.

The malt and hops are intertwined in such a way it's pointless trying to work out where in its creamy midst the impact of one starts and the other ends. You're better off letting the waves of floral, fruity, piney hops (Simcoe, Amarillo and Tassie Cascade), and the tar, liquorice, gentle roast and chocolate wash over you, perhaps pondering instead where Cascadian Dark Ale and hoppy porter start and end...