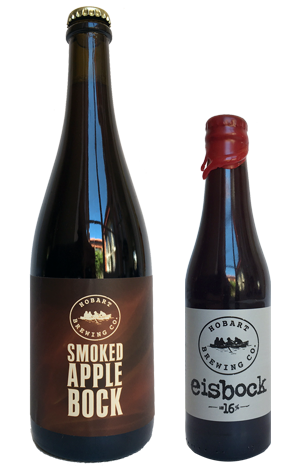 Hobart Brewing Co has quickly made a name for itself as one of the finer young booze producers on Tasmania. In 2016, they joined forces to make a beer with someone else in that category, Willie Smiths, adding their freshly pressed organic apple juice to a hearty German style bock. The collaboration didn't end there, however, as they also hooked up with the godfathers of Tassie whisky, inviting Lark Distillery to help them smoke some malt. The result was a hearty, rich, sweetly smoky dark lager given a tangy lighter touch by the presence of the apple juice.

The beer was so well received (in and outside the brewery) that it was brought back a year later. They didn't stop there, though. Some of the beer was sent off site to be freeze distilled, returning nearly 10 percent stronger to be packaged in a limited number of wax-sealed bottles. The result is quite the treat, with the experience ratcheted up in intensity, from the pungent smoke on the nose to the chewy dessert like dark fruit and sticky malt sweetness. Indeed, such is the intensity, despite its pocket size you'll still likely want to share it (and make a grateful friend of those with whom you do).