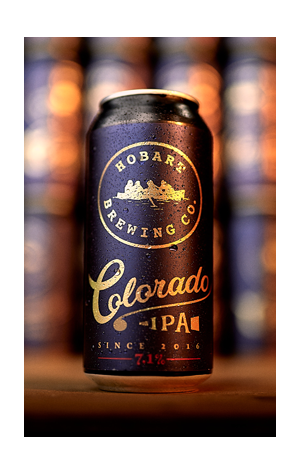 They might not have been operating out of their Red Shed on the Hobart waterfront for that long, but November 11, 2016, marked two years since Brendan Parnell and Scott Overdorf took to the harbour in a wooden row boat to launch the first Hobart Brewing Co beer: the Harbour Master Tasmanian Ale. So they're marking the anniversary with a new beer – one that's a long way from that session strength beer but close to where things started out for brewer Scott.

He commenced his brewing career in Colorado with Oskar Blues – as you can read in the Brew & A we ran with him – and has brewed a Colorado IPA for Hobart's second birthday. The aim was to create something that combined the characters of the East Coast IPAs becoming increasingly popular – big, juicy hop flavours, haziness and a restrained bitterness – with that of the West Coast – predominantly piney and citrusy with a firm bitterness.

What he's come up with is a 7.3 percent ABV, 90-plus IBU [International Bitterness Units] beer (or "beast" in their words) they say is "packed full of American hop goodness". For those who like to know, those hops are Chinook, Centennial, Amarillo and Simcoe, with hop supplier Hopco lending a hand on brew day too.