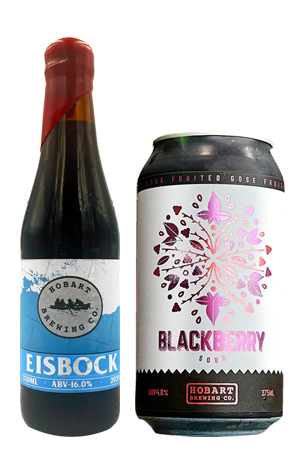 The Hobart Brewing Co Eisbock we're writing about here isn't brand new – we grabbed some a little while after release on a recent trip south – but it's one of those beers that, due to its heft, tends to stick around, and to which age does no harm. It's also not new in another sense: we wrote about the first release of the ice-distilled of their Smoked Apple Bock collab with Willie Smith's back in late 2017.

This iteration of Eisbock weighs in at the same 16 percent ABV, yet isn't perceptibly as heavy as many beers of its size. As you might expect, aromas are multifaceted, taking in old cola, fruitcake, fortified wine / brandy, Muscovado sugar, and stewed bananas. There's herbal edge to its smokiness too, all coming together for a sipper, with a finish that's dry as despite the heavily-laden trolley of sweet treats lining the route to that point.

You couldn't get move much further on the grand beer sphere from said beer than to HBC's early 2022 limited release, Blackberry Sour. The brewers took a gose base then loaded close to 100 grams per litre of Tasmanian Westerway Farm blackberries to the mix, resulting in a boiled lolly-like sour character on the nose – in part down to the lactobacillus and salt-enhanced body as well as the flavour. Pouring a bright pink / red, the fruit really comes alive on the palate where you're met by a crisply quenching tartness too. A post-Eisbock refresher, if you're still up for more beer after that beast, of course.