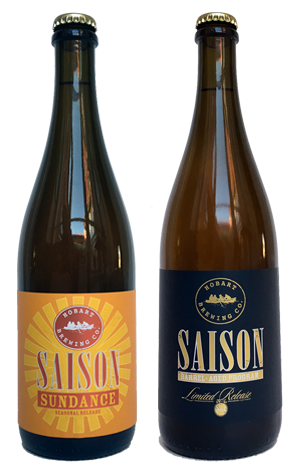 Hobart Brewing Co entered the world of packaged beer in a pretty straightforward manner, popping their Xtra Tasmanian Pale Ale into 330ml bottles. For beers two and three, they've stepped things up a little (or, in one case, rather more than a little). Both are saisons. Both come in 750ml bottles. But both are not alike.

First up is the seasonal Sundance Saison, one that takes the original beers of the style as its guiding light; in other words, lower in alcohol content than many saisons you see around these days and kept pretty simple. It's light on the palate, has some lively citrus characters, a touch of soft spice but little in the way of the funkier characters you find in some. A summery refresher.

Yet if that's one to share with mates and knock back without too much thought, the other – AKA Limited Release No.1 from their barrel program – deserves to find a home in the stemmed goblets of the country's beer aficionados. This 7 percent ABV affair spent four months in Forty Spotted winter release gin and Grant Burges Port barrels before being bottled and is up there with the best beers this saison fancier has sampled so far in 2017. The result is a beer with a lovely texture and with plenty to explore for those who like to really get into a beer, albeit packaged so subtly it's hard to pick up where one influence ends and another begins.

Let's just say that – particularly as the beer warms – its boozy, oaky former homes come more into play, with botanicals from the gin and fortified flashes from the Port joining the spiciness of the base beer under its splendid fluffy head to make for a fine first barrel release.