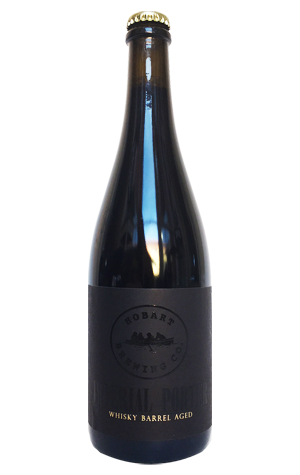 When your home is inhabited by so many distillers, it would be remiss for any adventurous brewery to pass up the opportunity for collaboration. And the team at Hobart Brewing Co has never been shy when it comes to taking advantage of the bounty on its doorstep.

For winter 2018, they got their hands on some whisky casks from Sullivans Cove and filled them with a souped up porter, a beer they say was inspired by the legendary Thrale's Entire Porter, brewed in London during the style's period of global dominance, that went on to be rebranded Russian Imperial Stout. The whisky character comes through clearly, accompanied on its journey through your olfactory system by a generous dollop of chocolate fudge.

Its body borders on the velvety, with heaps of dark chocolate leading the way, some fruity espresso characters and, ultimately, that residual whisky making itself known again in a gently warming, rounded treat.