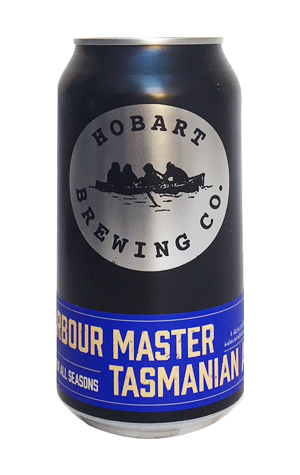 Today, you can visit the Hobart Brewing Company at its Red Shed just a hop and a skip from the water's edge. But, 18 months before their brewery venue was opened, Brendan Parnell and Scott Overdorf launched the company with the Harbour Master Ale in eye-catching manner: taking to the waters of the Tasmanian capital in a wooden boat, armed with a wooden cask of said beer, before being lifted from the harbour and embarking on a tour of the city's beer bars.

The beer, which they tagged a "Tasmanian Ale" is probably closest in style to a hoppy amber ale and is based upon one that Scott had been brewing on his homebrew setup for two decades – long before he and Brendan set sail on their joint venture. The "Tasmanian" comes mainly from the use of hops grown in nearby Bushy Park, which lend the beer floral, fruity aromas atop a biscuity malt base that's bold enough to belie the beer's mere 4.4 percent ABV.