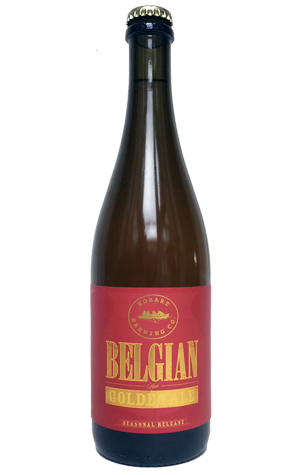 It would seem Hobart Brewing Co is a brewery that won't be easily pigeon holed. Their launch and, to all intents and purposes, flagship beer is a "Tasmanian ale" that's probably closest to a hoppy amber in style, while they're also displaying a fondness for Belgian styles (particularly saisons), are set to give their core range Iron Pot Porter an imperial porter sibling for the colder months and have knocked out multiple IPAs of varying inspirations and sizes since starting to brew at the Red Shed on the Hobart Waterfront. Reassuringly, they're proving rather adept at flitting between the styles.

It's back to Belgium for their autumn seasonal, a beer that follows a pair of saisons into 750ml bottles. And it's a beer that looks to stay true to those to which it doffs its cap. It pours a hazy golden colour with a lovely, fluffy white head from which you'll pick up plenty of coriander like spices, lemon zest and hints of banana and peach. Alongside the soft, sweet malts that keep its 6.7 percent ABV booziness in check, there are lifted floral and spicy flavours plus a gentle, peppery dryness tying things up.