For a number of years, the number of breweries and brewing companies in Tasmania remained pretty constant. Then, from 2014/15 on, things started going a little bananas. Indeed, through late 2015 and early 2016, in Hobart and surrounds alone, it seemed like we were hearing about a new brewery opening every week.

Among those to open its doors for the first time in 2016 was the Hobart Brewing Company. However, while March was the first time people ventured through the doors of its Red Shed to sample beers onsite, its beers had been pouring around the city – and occasionally further afield – for 18 months beforehand. Indeed, the very first pours of its debut drop, the Harbour Master Tasmanian Ale, took place in rather colourful circumstances, as brewery founder Brendan Parnell and his brewer Scott Overdorf took to the water of Hobart's harbour with the first barrels to highlight that they planned to celebrate the city's maritime past with their venture.

It's a venture that's been brought to reality by beer obsessed lawyer Brendan, who had been turned onto great beer by a trip to Belgium in the early 2000s, and American expat brewer Scott. The latter originally plied his brewing trade in Colorado before moving to Tasmania and taking up a role at Moo Brew, where the initial batches of Hobart Brewing Co beers were brewed.

All the while, as well as celebrating Tasmanian heritage and ingredients, the intention was to give the brewery a home by the water, and that they've done by turning the Red Shed, a charmingly rustic (and rusting) warehouse on a stretch of industrial land across the harbour from the bustle of Salamanca Place, into a welcoming venue. Their team painstakingly cleaned up the space and installed a brewery and Tap Room, all while making its well worn facade, creaking timbers and crooked corners very much part of its personality.

The space is served by food trucks and, from outside, offers guests views rather different to most venues around the harbour: instead of directing your gaze across the water, it makes a play of Mt Wellington across the city's rooftops.

As for the beers, Scott added a porter with far more going on than it had any right to at its relatively low ABV before the brewery opened and has been adding plenty more to pour through its taps since, from barrel aged beers to collaborations. A number of beers have been released in cans since early 2018 too.

The venue hosts regular events and gigs, notably its SHED YOUR SKIN Dark Mofo fringe festival, all of which is helping make Hobart Brewing Company a great addition to the Hobart waterfront and the thriving Tasmanian beer scene.

The return of our not-often-enough-for-our-liking brewer Q&A series heads south to Hobart. There, amid a flurry of new brewery openings, you find Hobart Brewing Company, whose head brewer Scott Overdorf has seen more beer than most.

In the grand scheme of things, Tasmania isn't that far from the mainland. Yet the Bass Strait has proven a challenging hurdle for most of the state's small brewers. Change could be at hand, however, as Will Ziebell discovers.

Few things in the world of beer excite people as much as hops. So we got in touch with a bunch of growers, sellers and hop-lovin' brewers to find out which varieties they love the most and whose mastery of hops impresses them most. Given its prominent position within Hobart and the regular gigs and other well attended events it hosts, Hobart Brewing Co is a venue with a need for an easy-drinker in its core range. And that's where Saint Christopher – aka "The Traveller" – sits. It's a cream ale where everything is served up in small doses: a little bit of fruity esters, some bready, cracker like malts and little in the way of hop aroma or flavour other than what they contribute to the crisp and dry finish. There's… Read more
Pale Yellow With their brewery venue hitting its groove in the Red Shed on Hobart's Waterfront, Hobart Brewing Co, back in early 2017 put a first beer into packaged form so more people could find out what brewer Scott Overdorf is up to. The beer was an XPA that visitors to the brewery had previously enjoyed on tap. And it was a beer that stood out from the majority of pale ales, XPAs and IPAs hitting the local market at the time as, while it was highly hopped like most (a not inconsequential 55 International… Read more
Golden Today, you can visit the Hobart Brewing Company at its Red Shed just a hop and a skip from the water's edge. But, 18 months before their brewery venue was opened, Brendan Parnell and Scott Overdorf launched the company with the Harbour Master Ale in eye-catching manner: taking to the waters of the Tasmanian capital in a wooden boat, armed with a wooden cask of said beer, before being lifted from the harbour and embarking on a tour of the city's beer bars. The beer, which they tagged a "Tasmanian… Read more
Rich Brown If Hobart Brewing Company's launch beer, the Harbour Master Tasmanian Ale, is a beer that possesses character bigger than its booze content would have you believe, the Iron Pot takes that and steps it up a notch or three. The second release – initially brewed at head brewer Scott Overdorf's former home, Moo Brew – is a punchy porter: a deep dark brown and impenetrable drop. Part of the reason for its punch is the use of rye, which adds both body and a spiky spiciness to the flavour, sitting alongside… Read more
Dark Brown Hobart Brewing Co are well known in Tasmania for putting on amazing mini-festivals, events and gigs at their brewery. They are also recognised as one of the most reliable producers of consistent beers in the state, something reflected in their regular schedule of recurring seasonal releases. When things get cold and dark in Tassie (walking the dog on the beach on the weekend in shorts was one of my braver moves of late) it’s great to be able to turn to something dark and still hoppy. Enter: The… Read more
Dark Brown Rye IPAs are a rare breed these days. Yet, as the weather turns colder (especially down in the deep south of Tasmania) the promise of a knock off with a bit of substance you can sit with becomes increasingly appealing. Enter Hops In The Rye, Hobart Brewing Co's 300th batch of beer. Pouring a warm, golden rust colour with light spice on the nose, you are met with a medium bitterness that sits well with the dryness of the rye. The herbal notes from the hops then join in the fun, leaving a pleasant… Read more
Rich Brown They love to play around with the saison style at Hobart Brewing Co and the start of 2019 has seen them release a couple in quick succession – both aged in wine barrels inoculated with Brettanomyces. The Brett Saison, which comes in 750ml bottles, is a beer seemingly after my heart delivering, as one member of the Crafty team put it: "subtle complexity". That it does, balancing a little Bretty pong with a relatively luscious bready malt sweetness, a touch of spice and a mouthwatering… Read more
Golden Yellow 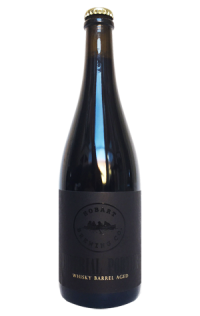 When your home is inhabited by so many distillers, it would be remiss for any adventurous brewery to pass up the opportunity for collaboration. And the team at Hobart Brewing Co has never been shy when it comes to taking advantage of the bounty on its doorstep. For winter 2018, they got their hands on some whisky casks from Sullivans Cove and filled them with a souped up porter, a beer they say was inspired by the legendary Thrale's Entire Porter, brewed in London during the style's period of global… Read more
Black Hobart Brewing Co's head brewer and co-owner Scott Overdorf started his professional brewing career on the canning line at Oskar Blues back before the first wave of Australian craft beer had even had time to collapse in a heap of poorly planned businesses and dodgy beer. So it should be little surprise that he likes to put out beers with origins in that part of the world, be it his Colorado IPA or this spin on the Cascadian Dark Ale. The beer has been around on tap before but made the transition… Read more
Dark Brown Hobart Brewing Co has quickly made a name for itself as one of the finer young booze producers on Tasmania. In 2016, they joined forces to make a beer with someone else in that category, Willie Smiths, adding their freshly pressed organic apple juice to a hearty German style bock. The collaboration didn't end there, however, as they also hooked up with the godfathers of Tassie whisky, inviting Lark Distillery to help them smoke some malt. The result was a hearty, rich, sweetly smoky dark lager given… Read more
Dark Brown 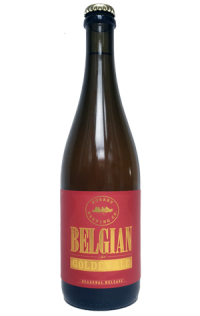 It would seem Hobart Brewing Co is a brewery that won't be easily pigeon holed. Their launch and, to all intents and purposes, flagship beer is a "Tasmanian ale" that's probably closest to a hoppy amber in style, while they're also displaying a fondness for Belgian styles (particularly saisons), are set to give their core range Iron Pot Porter an imperial porter sibling for the colder months and have knocked out multiple IPAs of varying inspirations and sizes since starting to brew at the… Read more
Golden Hobart Brewing Co entered the world of packaged beer in a pretty straightforward manner, popping their Xtra Tasmanian Pale Ale into 330ml bottles. For beers two and three, they've stepped things up a little (or, in one case, rather more than a little). Both are saisons. Both come in 750ml bottles. But both are not alike. First up is the seasonal Sundance Saison, one that takes the original beers of the style as its guiding light; in other words, lower in alcohol content than many saisons you see… Read more
Golden Yellow 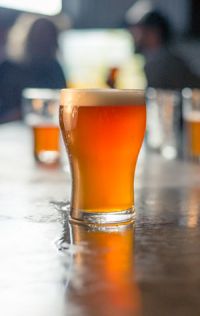 They might not have been operating out of their Red Shed on the Hobart waterfront for that long, but November 11 marks two years since Brendan Parnell and Scott Overdorf took to the harbour in a wooden row boat to launch the first Hobart Brewing Co beer: the Harbour Master Tasmanian Ale. So they're marking the anniversary with a new beer – one that's a long way from that session strength beer but close to where things started out for brewer Scott. He commenced his brewing career in Colorado with… Read more
Golden 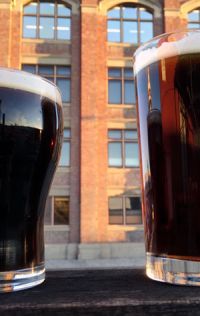 With their brewery venue up and running, the focus at Hobart Brewing Co now is very much about filling all their taps with tasty beer. They've got three winter seasonals planned, with two of them hitting taps on the very first Saturday of winter. One is a Chestnut Brown (pictured left) brewed with freshly harvested Tasmanian grown chestnuts. Described as "an English style sessionable 4.5 percent ABV, light to medium bodied dark ale", look out for "subtle nutty and caramel notes",… Read more
Dark Brown