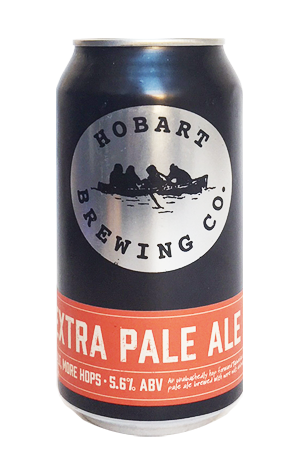 With their brewery venue hitting its groove in the Red Shed on Hobart's Waterfront, Hobart Brewing Co, back in early 2017 put a first beer into packaged form so more people could find out what brewer Scott Overdorf is up to. The beer was an XPA that visitors to the brewery had previously enjoyed on tap. And it was a beer that stood out from the majority of pale ales, XPAs and IPAs hitting the local market at the time as, while it was highly hopped like most (a not inconsequential 55 International Bitterness Units), it eschewed the tropical / citrus route.

Instead, they chose to plot their own course (presumably in a wooden boat with oars) and opted for spicy, sprucey, earthy with a touch of the floral instead. There was a bitter marmalade and resinous quality to the dry finish too, creating something that feels a little more traditional and "beery" than many of its peers.

Fast forward a year and the beer made the transition to cans and the brewery's core range. It also moved from being the Xtra Tasmanian Pale Ale to Extra Pale Ale, droped a little alcohol content (from 5.8 to 5.6 percent ABV) and underwent a little tweak to the hops. Out went Melba to leave Galaxy and Ella, with some Vic Secret added at the dry-hopping stage. And, while the piney, spicy character remains, there's a little more fruit there too, with the dry bitter finish somewhat softened too.